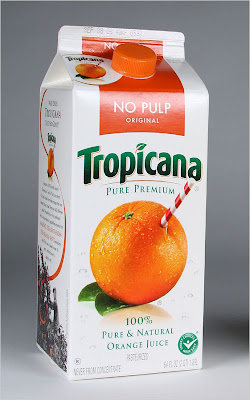 Asked if he was chagrined that consumers rejected the changes he believed they wanted, Mr. Campbell replied: “I feel it’s the right thing to do, to innovate as a company. I wouldn’t want to stop innovating as a result of this. At the same time, if consumers are speaking, you have to listen.”
Posted by Benjamin B. Clark at Monday, February 23, 2009

I just saw the new packaging in the store... the people are right, it DOES look like a generic brand!

I dont like when huge companies try to go with a new logo/slogan etc. I saw the new packaging and was horrified. I actually kinda like it more minimal, BUT I think we are just used to seeing the old version, and we are used to that. I went to the store and it was so funny..I was with a friend, and we couldnt find it at one store so went to another, and then come to find out we just skipped over it because we were looking for the old one. haha...oh well....I think lots of companies are trying to "update" just a hard thing to accomplish.

I am all for change. I like the idea of rebranding because, if nothing else, you get some PR. But it has to be better, not worse. Where was the focus group? 30 people taking 5 months, they must have had at least one focus group, right? Weird. Pepsi's campaign has grown on me. I still hate the different sized smiles and the arbitrarily placed word on the can.

I'm not crazy about the new look, but I did notice that the actual gallon-sized carton is really cool. It has a nice ergonomic design that probably pours smoothly. I wish milk companies would use that carton for their gallon sizes. I always spill some milk when I pour from a new gallon carton. I usually stick with the half-gallon carton since I buy organic milk- much easier.